The Independent Guide to Garden Offices

A popular aspect of garden office buildings in recent years is the addition of ‘green’ roofs or ‘living’ roofs as they’re also known. Here, the roof itself is covered by natural vegetation of some kind, and this serves several purposes (more on that later) as well as being a natural-looking and attractive element within the overall garden design. It also, of course, helps to camouflage the roofline of the garden office or studio so that it blends into the garden landscape more naturally.

There are several types of green roof including ‘Sod’ roofs, ‘Wild Flower’ roofs and ‘Sedum’ roofs. Commercially it is the last two which are generally the most widely available for garden buildings but Sedum is by far the most popular choice for green roof covering in recent times.

The Sedum genus, also known as Stonecrops, contains almost 600 varieties and it’s their succulent leaves which make them so good at storing water. They vary enormously in colour and size and have flowers usually with five petals and ten stamens. Advice should be sought from your garden buildings supplier as to which variety is best suited to your particular situation because some varieties suit warmer locations while others thrive better in colder conditions.

The Benefits of Sedum

Sedum needs little maintenance, usually no weeding because it survives with very little soil, and little or no watering. It stores water very efficiently within its leaves – occasional rainfall is usually sufficient for its long-term survival. Also, Sedum roof coverings do not require cutting, unlike grass or ‘sod’ roofs. They also add to both acoustic and thermal insulation, the latter meaning that the garden building will stay at a more constant temperature throughout the year, requiring less heating in winter and possibly no air conditioning in the hottest summer months.

The primary disadvantage of sedum, and green roofs generally, is the extra initial cost. This is usually higher because the garden building, particularly the roof structure, needs to be more robust in order to carry the extra weight. However this may be recouped over time because of the savings in heating during the winter and the lower likelihood of requiring air conditioning during the summer.

Another thing to consider is whether or not you will enjoy the extra insect activity close by, particularly near to windows, as some insects may lose their way and end up joining you indoors! But many will not mind that at all and most will agree that the benefits of a green roof far outweigh any disadvantages.

Our thanks go to Gembuild for preparation of this article. Gembuild are a garden buildings company based in Surrey and offer sedum and wild flower roof coverings as part of their range of garden offices and studios. Of course they also have more traditional roof options available, including asphalt shingles, cedar shingles and traditional grey slate. Learn more at www.gembuild.co.uk or call 0800 096 5466 for further information.

Lynn Fotheringham is the editor and owner of InsideOut's Garden Buildings Guide. She is also a director of Gordon Smith Architects.
InsideOuts Garden Buildings Guide is an independent guide to garden buildings for people who want a special building for their garden.
Lynn's experience in garden buildings comes from 10 years of running a garden office design and build company. 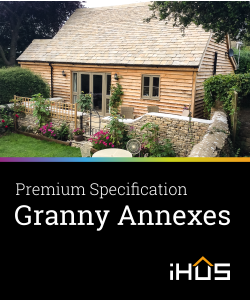